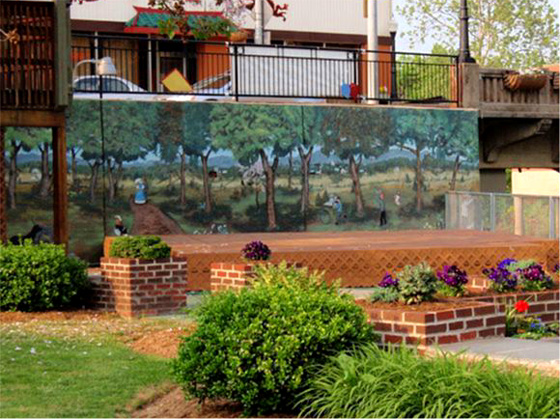 What is Public Mural Art

For those who have no clue what public art mural is, here is my short blog telling the story of public mural art and what it represents!

Murals are works of art painted or applied on the surface of an outside or inside wall as public art by a muralist and/ or community members. The artwork is created to be in harmony with the building design and is intended to make a socio-political statement about the community or region where it's located. Boldly painted, murals make a strong statement and can be realistic paintings of historical events, beautiful scenery or abstract ideas. The objective of most public murals is to uplift the community, add interest, beauty and educate.

Some of the most loved artwork in our human history has been mural art. Lonardo da Vinci's "The Last Supper" is a beautiful example. Michelangelo's grand fresco painting on the ceiling of the Sistine Chapel is a breath taking example of remarkable murals. "The Last Judgment" painted on the altar wall of the Sistine Chapel took Michelangelo four years to paint, 1536-1541.

The Mexican mural movement in the 1930s brought a new prominence to murals as a social and political tool. Diego Rivera, Jose Orozco and David Siqueiros were the most famous artists of the movement. Between 1932 and 1940, Rivera also painted murals in San Francisco, Detroit, and New York City. In 1933, he completed a famous series of twenty-seven fresco panels entitled Detroit Industry on the walls of an inner court at the Detroit Institute of Arts.

Edsel Ford commissioned murals by Diego Rivera for DIA in 1932. Composed in fresco style, the five sets of massive murals are known collectively as Detroit Industry, or Man and Machine. The murals were added to a large central courtyard; it was roofed over when the work was executed. The Diego Rivera murals are widely regarded as great works of art and a unique feature of the museum. Their politically charged themes of proletariat struggle caused lasting friction between admirers and detractors. During the McCarthy era, the murals survived only by means of a prominent sign which identified them as legitimate art; the sign further asserted unambiguously that the political motivations of the artist were "detestable". Today the murals are celebrated as one of the DIA's finest assets, and even "one of America's most significant monuments."


This is a simple popup.